In 1882, Fransisca Fincent was married three times, twice widowed and the mother of 10 children. With her first husband François de Fonseca, who was of Spanish noble descent, she had five children and with her second husband Felix Vandepitte, a miller from Aalter, she had two children. Finally, she married Louis De Vos, with whom she had three more children. Father De Vos was a miller and next to the mill Fransisca had her inn. It served as a waiting room for the farmers who came to grind their grain. The farmers paid the miller with two scoops of flour from each bag that was milled. This flour was used to bake bread. Thus, one could eat bread with smoked ham, "flat cheese" or farmer's omelette in the inn.

Fransisca was called "Mother Siska" by her children and soon everyone addressed her as such. When she went on an outing to Amsterdam, Mother Siska saw a painting of a waffle iron with four hearts. Back home she had her brother-in-law, a blacksmith in De Pinte, forge a waffle iron with five hearts. In this way she had a heart for every child per two waffles and every birthday they baked waffles. 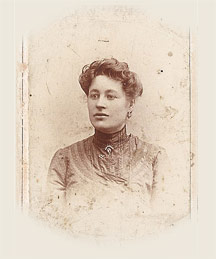 In Mother Siska's inn, sales were organised by notaries. When a notary from Antwerp tasted the waffles of Mother Siska's children, he asked her to organise a similar waffle party for his daughter. The party was such a success that it marked the beginning of waffle sales on demand.

Mother Siska's inn became a meeting place for tourists coming from Heist. A horse and cart ride was used to bring the people. Ten years later, in 1892, the speciality could be sampled without prior order. The ever-increasing number of visitors made it necessary to expand. In the garden, trestle tables were placed and Mother Siska bought folding chairs from a bankrupt circus. These chairs served until 1987 and are still in our possession. Mother Siska's sons baked the waffles on a wood fire and did the heavy work, while the daughters served in the inn. In winter, the children went to Wallonia to work and to improve their French in order to better serve the mainly French-speaking clientele.

Mother Siska's waffle house was so successful that two sons and three daughters opened a second waffle house, "Bij de kinderen Siska", on Oosthoekplein in 1907. Her youngest daughter, Marie, also wanted to follow her example when the First World War broke out in 1914. Mother Siska died in 1918 due to the Spanish flu and was not allowed to see the opening of the third shop.

Marie had gained experience with her mother and sisters and was determined that the third Siska would be the biggest, most beautiful and best situated. So in 1919, she opened "At the Daughter Siska", which would change into "Marie Siska" a year later.

Her example was followed by her youngest brother who opened "Gustave Siska" in 1923. The granddaughter of Mother Siska would open the fifth Siska in 1936 in Sint Idesbald near Koksijde. This business was called "Siska du Zoute" referring to the famous businesses in Het Zoute.

Until after the Second World War, the Siska's continued to grow and contribute to the tourist developments of Het Zoute. Unlike their mother, only some of Mother Siska's children were married. Marie Siska, for instance, had a daughter and a son. Her son, Urbain Dossche, would take over Marie Siska in 1949 together with his wife Georgette. His sister, Germaine Dossche, took over Kinders Siska from the aunts.

Urbain and his wife began to expand Marie Siska. A miniature golf club was added, and the menu was expanded and brought up to restaurant level. Marie Siska became known far and wide. The stars that came to perform at the casino invariably paid a visit to Marie Siska and its famous waffles. Paul Anka, Josephine Baker, Martine Carol, Ava Gardner, Gilbert Bécaud, Etchika Choureau and The Platters were guests here. It was also an honour to welcome King Leopold III and Queen Astrid to Marie Siska. They had a country house in the Zwin and after the war the king regularly came to eat waffles after a game of golf with his friends. He took his place in a separate room and the table at which he sat was called the "King's Table" by the staff. You can still sit at this table at Marie Siska.

In 1967, Marie Siska was completely rebuilt except for the waffle bakery. A complex with 450 indoor and 550 outdoor seats was built. In 1987, the business was transferred to grandson Stefan Dossche and his wife Nathalie. There was a lot of investment again. A hotel with seven luxury rooms was added. The playground was completely renewed and Marie Siska underwent a metamorphosis. The new generation of royal children are now also guests, and for many people Marie Siska has become the "Institute" of Het Zoute. In season, more than 1000 freshly baked waffles are sold every day. These are still baked according to the secret recipe. The restaurant also has an important place. The minigolf club sponsored by the clothing brand River Woods organises a tournament for children every year in August and is the perfect place for a fun afternoon.

The parental home "Mother Siska" was sold and demolished in 1975. Fortunately, the mill was spared and now serves as a residence. Gustave Siska was sold two years after it was erected due to illness and was finally put under the hammer in 2009 to make way for a residence. The Siska in Saint Idesbald was sold in 1960 and is still being operated. Finally, in 2011, the owner of Kinders Siska decided to sell his business to a real estate agent.

As a result, Marie Siska is the only waffle house still run by the family, selling original waffles.

In the meantime, we are celebrating 140 years of Siska waffles and the fifth generation, Marie-Julie Dossche, has joined the business, and let us hope that she will also continue this tasty tradition of the Salt.